Over the last month I painstakingly visited two of London’s best known steakhouses and forced my way through two slabs of melt-in-your-mouth, decadent, tender Chateaubriand steaks, just so that I could share with you, who’s does it better. Hawksmoor or Gaucho? And the winner is…

As an Australian, steak is like a delicacy to me. As a toddler still in a nappy, I was already gnawing on a sweet, juicy and tender piece of eye fillet. To me, a good piece of steak, cooked perfectly with the right amount of pink in the middle and a light seasoning of salt and pepper, is a beautiful memory of family dinners and hot, humid summer nights. I can still smell that smokey scent of the smouldering barbecue that complements your palette as you enjoy your meal, and lingers in the air hours after you’ve finished eating.

Not an expert but certainly an enthusiast, I thought I would put my tastebuds to work and visit the two steakhouses claiming to offer up some of the best meat in London; Hawksmoor and Gaucho. To minimise the variables, I ate the same cut of meat at both restaurants; a Chateaubriand. Not the cheapest cut of meat but certainly a delicate and tender piece choice, Chateaubriand is a large, thick steak that is cut from the tenderloin fillet; a section of the cow spanning from beneath the ribs to the backside, and running alongside the backbone. A mostly unused muscle of the animal, this is why that particular cut is so tender, and a favourite of mine!

I first visited Hawksmoor in Knightsbridge. Located in a basement, the space is dimly lit and exudes the typical Hawksmoor style with Ralph Lauren-green, leather seating, booths, and that dense, luxury night-club feel. Gold accents and marble detailing make you feel like James Bond might walk up to the bar at any moment and ask for a ‘medium-dry martini, shaken not stirred’. The menu has a rich selection of seafood but I was only there for one thing. My partner and I shared a 500 gram Chateaubriand and half a lobster (plus four too many sides; the triple-cooked chips are highly recommended!). Served in a black, cast iron dish, the steak looked spectacular when placed on the table! Literally melting in your mouth, a light seasoning let the flavours of the meat be the hero. The chargrilled outside added the perfect amount of smokey, barbecue flavour that also allowed the middle of the steak to appear even smoother and more delicate. I thought Katsuya in Hollywood served me the best steak I would ever eat, but after that night at Hawksmoor, things might’ve changed! 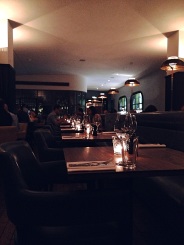 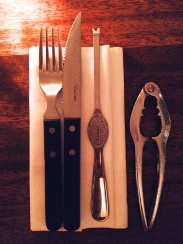 Hawksmoor held the stakes high and Gaucho was going to have to serve up something pretty incredible to take the lead. Definitely more my preferred design style, Gaucho in Richmond is situated on the River Thames with large, bi-folding glass doors that open up during the summer. With a minimal but elegant interior, the Gaucho-signature cowhide accents and mirrored surfaces made the space seem a lot bigger. However, at times you did feel like you could be sharing your meal with the couple at the next table along. Before you order, the waiter brings a board of uncooked cuts of meat to your table, describing their qualities and making suggestions for how each should be served. But we already knew what we were having! A light starter of bread varieties with an incredibly delicious chimichurri dip, was more than enough to satisfy the stomach rumbles as we waited for our 750 grams of Chateaubriand.

Bought out on a board of its own, the waiter cut the steak at the table. Revealing, slice by slice, the perfectly cooked meat inside, my tastebuds felt as though they were dancing (or more accurately raving) atop my tongue. As it is an Argentinian steakhouse, we got the steak marinated in the house marinade which was a light selection of oils, garlic and herbs. Just as delicious as expected, the meat was beautifully sweet and tender, and the marinade was an exquisite complement to that cut of meat. But, it didn’t have that decadent, melt-in-your-mouth flavour that Hawksmoor so divinely possessed. 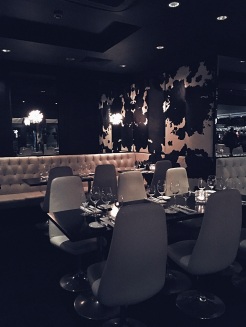 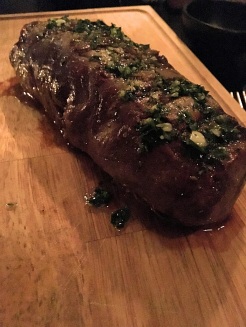 Although you will be guaranteed to eat some of the tastiest steak in town, Hawksmoor was the clear winner of this steak-off! Do yourself a favour and splurge on yourselves a little … because Hawksmoor will not disappoint!

I do need to make a special mention of Hawksmoors‘ signature dessert, the Ambassador’s Reception. For legal reasons, they aren’t allowed to call it a Ferrero Roche but it’s basically a giant one on a plate and it’s utterly divine! No arguments, just order it!